Switzerland for me was a perfect time to reflect and research. As every residency turns out I end up producing something I don't plan to. On the second evening there the church bells had been chiming for the past half an hour. I felt a sense of overwhelming joy for being in a beautiful landscape, with good food, good people and good weather.

I spent the evening staring out of the window at the twinkling glow from the house opposite and typing a short story I had been waiting to write for a while. In the morning I heard the occasional moo from a cow and Talisker, Nina's tiny dog barking outside.

During my three week residency, I spent most of my days writing and educating myself on David Lynch. I didn't expect this at all as I had planned on working solely on a commission I had back at home in England. The creative environment took hold. The first time I met Frank, the other artist, a musician from France, we spoke of small and creepy suburban towns. Of which both of us were originally from. This sparked a mention of Twin Peaks. As I primarily write based on human observation within certain environments, this was a perfect piece of research for me. I became enthralled by his work and when I wasn't writing, I was watching Blue Velvet or Mulholland Dr.

On some days I would take the tiny train into Nyon, and wander around the lake and small streets making up ideas about the people who lived there. I saw one old lady in her house making something delicious I'm sure and another in her sewing shop, knitting by lamplight. It all looked very idyllic and cosy. The lake is the cleanest body of water I've seen in my life. One day I took the train in the wrong direction and ended up somewhere further into the countryside. I didn't mind though, as I saw horses right next to the station and a hawk in the opposite field. The church and small village it was in was something you can only imagine in fairy tales.

Being in such an idyllic environment and in a lovely house made me dream more than usual. Dreaming makes an influence on my writing so I was glad of it. The best dream I had went like this - I don't know where I was, but I felt like it was Africa. I was cycling along on my bike and there were many other people doing the same around me in all directions. But it was very calm and the sun was setting, spreading an orange glow over everything. The road was only dirt, and there were many trees, plants and fields. I definitely was nowhere near a city. I felt very at ease and like I belonged and I was myself. I cycled to somewhere that felt very safe and colonial, like it was a university of some kind. Like Oxford, or Cambridge or Yale. Somewhere prestigious. I parked my bike and walked through a café to meet my friends. The inside was like an old school room, the floor and walls were panels of dark wood, and it was dark, but not gloomy. It was cosy, and the air felt warm outside, so it must have been a warm country. Then the dream changed and I was outside walking further into the complex. There was a club where two girls I used to go to school with were. They had invited me there and were dressed up in rainbow coloured wigs. Like the Garry Glitter one my Dad used to have. Strips of shimmering plastic. I didn't want to go in because, I hate clubbing and it looked really lame. I didn't like those girls anyway, they weren't very interesting, and I would have to fain interest like in real life sometimes. Then a group of fat ignorant men rolled out singing and generally being heinous. I don't know whether this was part of the real dream or a daydream when I woke up. The real dream, was the best though and I woke up feeling at ease and the happiest I have felt in a long while. The feeling of being where you are meant to be and being able to be yourself at every moment of every day, is pure luxury. 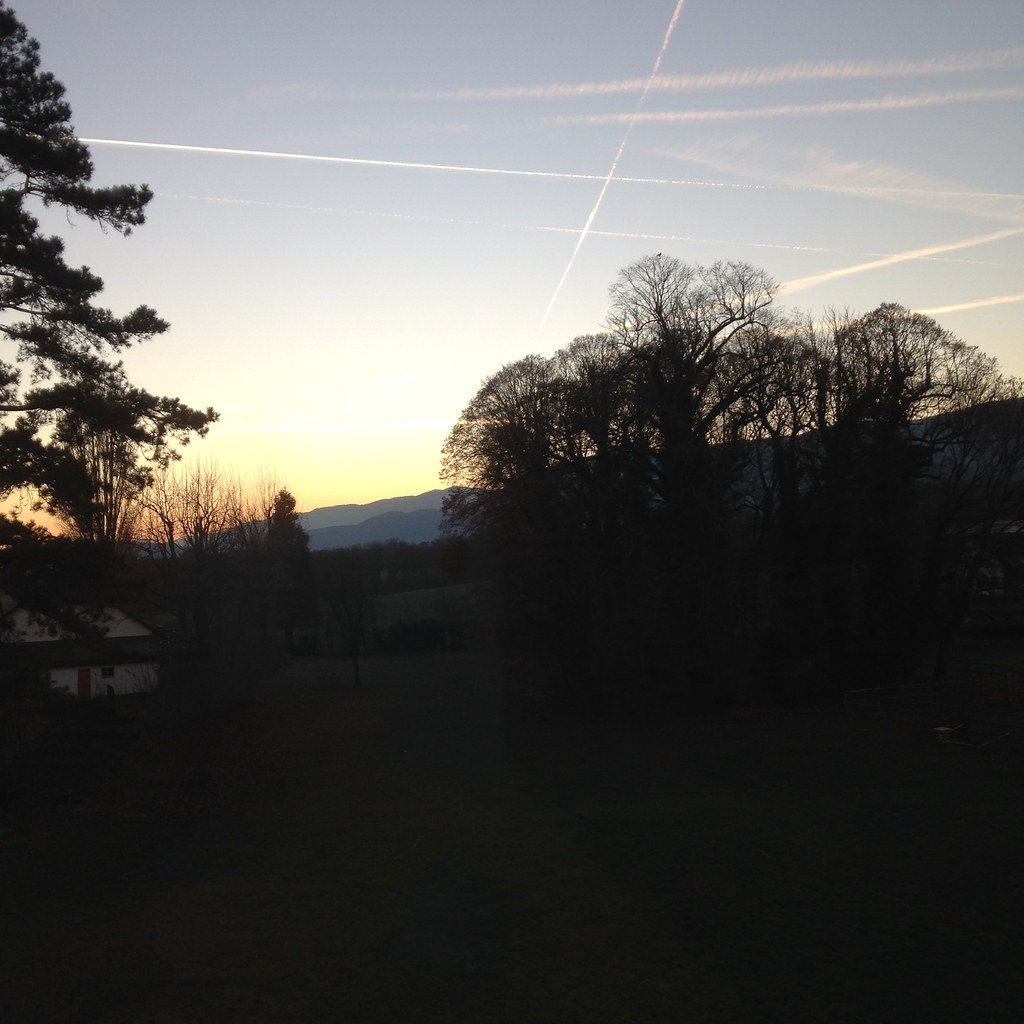 Later on that afternoon, the sun burst through the clouds and all of the frost perching on the cluster of pine trees started to melt off as if a rain shower has just passed over us, but only from the cluster of trees. It was ‘magical’ as my Grandma would say. It stayed this way for at least half an hour or more. The branches drooping further and further towards the ground. Frank – who rarely emerged from his room – dashed out in a flurry to photograph the spectacle. The sun was shining so brightly directly through my window, I couldn't stare for long.

Trélex Switzerland was a perfect induction back into studio life and thinking like an artist for every minute of the day, instead of being hauled up in a mindless job. So I couldn't recommend this residency enough to anyone who is considering it.