Joana BC is a young portuguese artist whom I met in London. Her work, whether drawing, painting, animation or sculpture - increasingly combined through installation - veers between lighthearted humour and much darker, cynical subject matters. Her canvases may be covered in seemingly childish cartoons or deep layers of acrylics heavily collaged with found materials; her work may be playfully spontaneous one moment and painfully cruel the next. 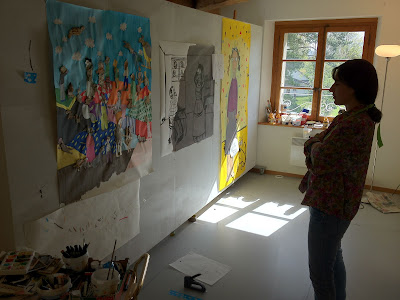 Joana in full swing with painting and drawing. The lady in the painting
on the right didn't survive the night.


Consistent throughout is her concern with ideas of family and home, filial duty, obedience and control, violence, rebellion, rage and love. These ideas are painfully tangled with Portuguese history and identity and were insidiously corrupted during the Salazar years. However, Joana's work is not so much concerned with history, politics and social commentary. It comes from a much more personal place, sometimes inspired from family histories and tales, sometimes from her own fears, dreams, imagination.

Most poignant of all for me, is her refusal to compartmentalise the characters that people her narratives into good and bad. No-one is ever completely evil: violence is at worst pathetic, always defeated by her humour. Similarly, love and faith are also manipulative, suffocating and incomplete. Joana declares a healthy suspicion of the self-declared saint and sympathy for the rejected  - expressed through her use of things discarded by others in her sculptures. 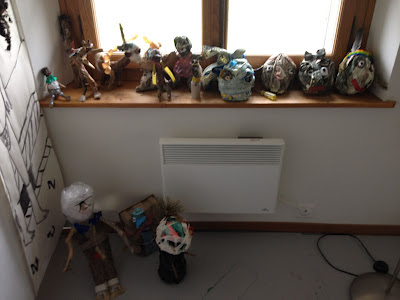 A number of mischievous little beings have come to life from
things found in and around Trelex and are invading the studio.

While in Trelex, Joana has made a number of paintings on paper, worked on a large installation in the old station master hut at the bottom of the garden where we look forward to an impromptu candle-lit private view one night next week. Above all, Joana wrote the first draft of 'The Goat', a substantial short story about how the efforts of a young girl to integrate a goat into a catholic family stirs up all sorts of anxieties rooted in the grandmothers past. 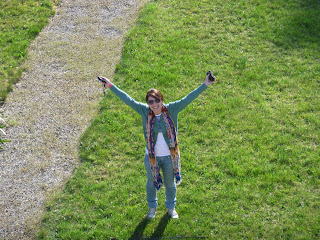 Joana on the lawn, taken from the studio by Hira Mansur.

In the end, Joana extended her stay by a couple of weeks which allowed her to put some finishing touches to her story, have a small candle-lit private view out at the hut in the garden and film a performance of herself as a bride interacting with her sculptures. 'It's amazing what you can get done in a day, when you are on a residency. You can put an idea into practice so quickly here', she concluded... 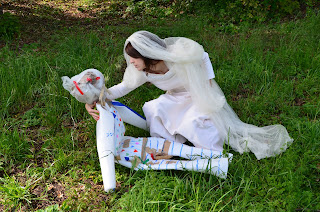 Further information including more photos of the work from the residency about Joana BC can be found on her blog here.