I can never predict how a new environment will impact my work, except that it’s usually the more humdrum and pedestrian arrangements that produces the biggest shifts—and that I am usually am unaware of their influence until afterwards.

For five weeks, Trélex would be my idyllic temporary home and respite from New York City I set up the studio so that I would command the breathtaking view over the fields and into the mountains, the colors and lights constantly shifting. I loved my view so much, I felt little need to actually go out into the physical nature. Instead, I began the transformation that usually happens: I left the socialized land of the living as I adopted later and later working hours, barely leaving the third floor, much less even leaving Trélex for Nyon, Geneva and beyond. I am usually an active person, social, physical, with a love of grocery shopping and cooking elaborate meals, here instead I curled inwards, my life becoming more asetic, cloistering myself like some atheist nun—a fantasy enhanced by the church bells, heard and not seen, reminiscent of the funeral at sea in Lars Van Triers’s Breaking the Waves

Here is an example of a works I completed soon before coming to Trélex. In hindsight, I must have been anticipating being in a less urban environment.

While there is no requirement to produce work (as I would have preferred to spend the time doing more research and replenishment), I had both a solo and group exhibitions, and therefore internal pressure towards production. As a veteran of several residencies (Trélex is lucky 13th, officially), I’ve learned to bring at least one work already in progress so I can begin with the ground running. When I brought this to Trélex, but then only the faces and hair had been drawn, the bodies barely outlined.

I left with it still not completed, though I hope to finally do so back in Brooklyn. The flora and fauna, as patterns on skin and clothing, felt unconnected to my new surroundings. Although the work I had done before Trelex contained nature elements, they were more graphic, more like patterns, and often contained to the body and clothing, a form structured onto another central form that provides the narrative focus. As the days and weeks progressed during the residency, the vegetation grew more fecund, more enveloping, and more like a principal character itself.

In this work, not only does the sunflower function as an equal (and confrontational) figure, but the vegetation expands beyond the picture frame, extending into the rule world. Also (and this was not consciously done), the perspective of the human figure is skewed, compared to the fully frontal, direct point of view of the other works—as though the figures are tilting away from me. I only realized this a few days ago, the fact of moving from the walls to work to the table, and hence my bodily relationship to the work, affected the perspective of which I drew the characters.

My studio in Brooklyn does not have a window (though I have lovely natural light via a skylight) and I work on the walls while standing, facing my work like facing a person, often eye to eye with my characters. Because I work with graphite on translucent Mylar, I pick up the texture of any surface that is not perfectly smooth. The studio in Trélex came with a desk with a glass surface (perfect for incredibly fine, detailed work), and situated in front of this great with a breathtaking view, so for five weeks I switched from vertically confronting my work to hovering over a horizontal surface, with nature surrounding me through all my senses.

Despite my self-sequestration, I did make a handful of trips, including to Venice, a seven-hour spectacular train. (The other artists-in-residence in Nyon at the time were all from the UK and poked fun at me for positing Venice as close by). My desire was to check out the Biennale and glimpse the global art world at a glance, but it was the interior of the Basilica of San Marco, its onslaught of visual information, history and different worlds that sparked the desire to capture something of that quality. I’m sure that was what was responsible for this work:

The tilted perspective from the sunflower work rotates further in Ripe: the viewer is placed in a similar point of view (seeing the picture plan from above), mimicking my relationship hovering over the drawing. Again, this was not consciously decided at the time, only something I noticed very recently, though it now seems obvious.

While working on this piece, I had an empty space in the top left corner—I knew that I wanted to fill up the entire space, but I didn’t want to keep drawing dying vegetation (which themselves may have been  inspired by the compost collected and then fed to the chickens). Because of the intensity of the drawing, and because I don’t hold the pencil in the “correct” way to prevent potential tendinitis and carpal tunnel, I was forced  to take  a rest day to give my wrist a break. A day trip to Colmar as pilgrimage to the Isenheim Altarpiece by Matthias Grünewald provided a jolt of inspiration. Here are two of the panels... look at the one at the right... 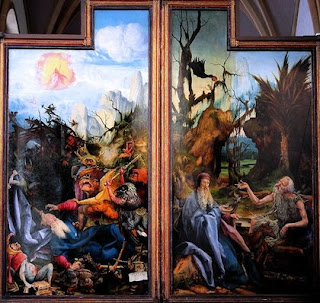 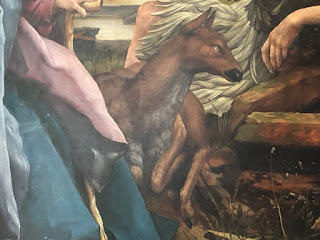 I enjoy examining after a residency the subtle influences that shape the work—but I also enjoy when I encounter a very direct source of inspiration!

I now have 4 to 5 works in various stages of completion, and I’m excited to see how the return to NYC will in turn affect the ones still in progress. I know the effects of Trélex will continue to work its influence, bringing in fresh visual ideas and concepts for months to come. Thank you Nina, and thank you Trélex!