Since studying at Camberwell together, we had somewhat lost touch with one another but Maria heard about the residency through word of mouth. Through our discussions in the last couple of weeks, it seems that our work has converged towards an interest in the formal elements of the painted image. Tirelessly, her work seems to repeat: a painting is an image is flat. Yet her work, like mine, is also obsessed with painting itself. Doubt about the value of painting never seems to hinder the production of the next canvas but rather fuels the silent frustration that drives her on. 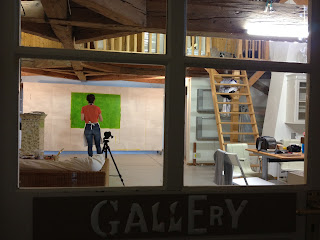 At work in Trelex painting the green square for her video

Maria's work patiently insists on the themes of illusion, flatness versus painterly depth. A number of her paintings are paintakingly realistic renderings of photographs or photocopied images. But while some painters fall in love with the blurred oil painting as a way of smudging a boundary that doesn't really know where it wants to be or because of a dislike of precision, Maria's blur is a deliberate reference to the  photographic focus. This is clear both from the superposition of perfectly sharp trompe l'oeil and from her increasing use of juxtaposed photographic material, sometimes blurred, sometimes sharp.

One of her video works looks at first like a close-up of paint slowly running down the side of a paint pot. It seems to keep going and going, almost in slow motion, and has the same stillness and delicate tones as many of her paintings... Is it just me who could watch paint do its thing for hours? But if your gaze shifts to the title (Challenger) you might recognise that these are fragments of the exploded Challenger Space Shuttle that fall down through a perfect blue sky. And so the work challenges us to think about the value we attach to paint or to one image over another. Painting suddenly seems rather gratuitous in the face of these images of death and destruction. Fine art meets popular culture but it's a uncomfortable moment. 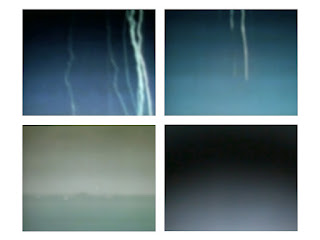 Another recurrent theme is that of value and the fake.  Maria works a lot from found imagery, but from the outset seems to warn us that there are any number of images from which she could start. While she may spend several months completing a painting, she is wary of attributing value to the result. No Turin shroud here, but plenty of oblique references. The value of the single image is always questioned and a lot of her work seems to feature deletion in one form or another. But light deletions: a simple crossing out or a piece of torn masking tape across the image - a deletion that doesn't really mean to harm the image. The masking tape is light, feels impermanent. However, this masking tape is painted on, a real deletion, a skilful trompe l'oeil, a painful defacement of a delicate painting. 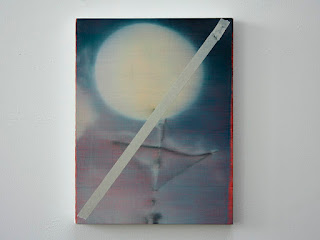 Another image is of her paintings hanging in a grand white museum space, a typical installation shot. But the shadows reflected in the polished floor don't quite match, the perspective make the painting sit a little uncomfortably on the wall, alerting the viewer that this is a constructed, fake situation. 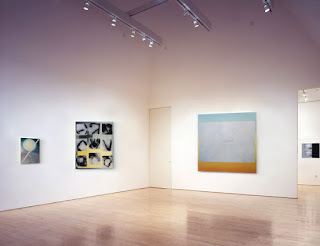 The problem of value of one canvas over another exemplified by the video Maria has worked on during her relatively short stay in Trelex: in this she is seen sitting in an office chair facing a studio wall with the odd traces of paint on, flicking through one image after the next with a simple wave of her hand, in an exploration of artistic process: 'Art is just aesthetic choice', she says. 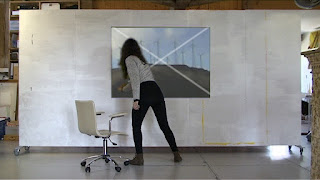 Whether video, photography or photocopy, her digital media-based work supports the concern with depth and illusion apparent in her paintings. Recently Maria has started to work on exploring how to combine her laborious paintings (sometimes of photocopies) with photocopies, film. The canvas has come off the frame and found itself affixed to the wall with masking tape to operate in the same plane as a photocopy or a digital projection. 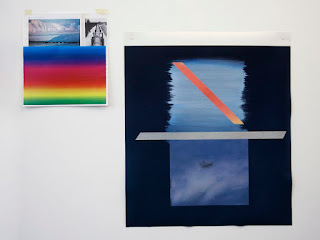 In contrast her paintings piling up in ther studio (posted on her blog here) seem to have become an unwieldy, bulky scuplture in its own right. An on-going acretion as valid as any one of her single canvases. 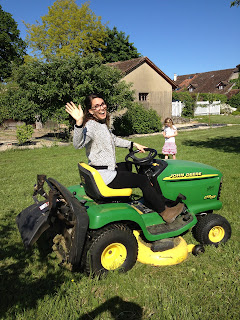 Oh, and Maria turns out to be an excellent tractor driver... A bientot!