I spent a memorable month at the Trelex residency last autumn. I am most thankful for the time spent in that great attic (which is situated in one of the most inspiring houses I have ever visited). I am thankful for the people I got to meet and for the views I got to see. I  am therefore pleased to finally contribute to the blog by showing some of the work done while I was there. I have broken up a short story of mine called "Behind the blackberry thicket" © into smaller segments. The sequence of  illustrations are black ink drawings, layered with transparent sheets. I spent most of my time drawing and writing (when I didn't enjoy the uncovered peak of Mt. Blanc, drink coffee at the auberge, interact with locals, chat with fellow artists or go for walks with the happy dog Talisker). Many thanks to Nina for her open heart and home. Hope you enjoy. Anne. 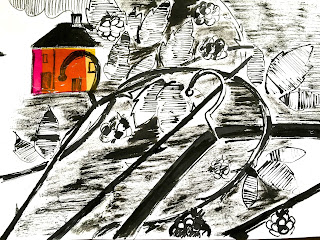 1. The blackberry thicket heaved like a rampart around the white wooden house in the summer twilight. She could hear a blackbird rustling in the thicket among dead leaves from another year. Other birds sang softly. Other than that, it was a quiet evening. 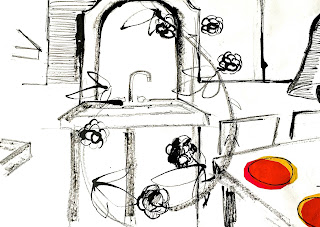 2. The thorns scratched her while she hunched under the arched branches that formed the tunnel. A thread in her cardigan tore up and her hair was no longer perfect. She stood in the garden and corrected the cool cotton dress and looked at the man in the lit up kitchen. She poked away a blackberry seed stuck between her teeth and noted that he was bald. She studied his movements,  how he made sure that there were space for two fingers between the plate and the edge of the table. He took out wineglasses, polished them and examined the result against the kitchen lamp. 3. She walked the last stretch along the garden path that led up to the main entrance. Some white bellflowers shone in the flowerbed and the gravel crunched under her Gucci shoes, which she acquired a few weeks ago. She was excited to see if she could make another convenient deal. Looking good never damaged when it came to negotiating prices. She fished out a powder mirror from the purse and stood for a moment in the circle of light from the outdoor lamp and studied her appearance. She wiped away some blackberry juice from the corner of her mouth, put lastly a strand of hair in order and rang the doorbell. 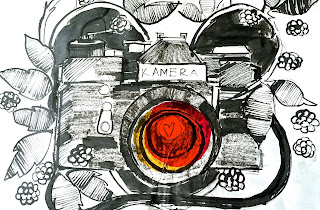 4. For a moment he thought of his dead wife. She had left behind a crowded closet with quality clothes. Expensive brands ranging from petite to medium. He spent several weeks going through everything, with the measuring tape hanging around his neck. Took measurements and pictures. Created a profile and waited for a response.

Many women came. Several bought something, but no one ever stayed. Perhaps he would be more successful this time?

He could see the woman's silhouette through the frosted glass. She stood still and waited, without ringing additional times. He was grateful for the gentleness this demonstrated. He opened the door and inhaled her scent mingled with the fresh evening air. He gauged her figure with a quick gaze, with about the same speed as a fast camera shutter, while he simultaneously politely greeted her welcome. She was perhaps in her forties. In good condition. Certainly attractive. His jitters passed quickly into an exuberant hospitality. 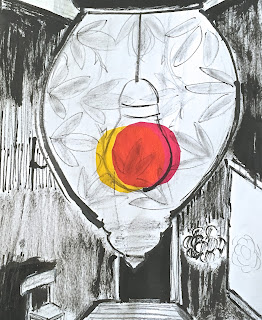 5. "You haven't thought of trimming the blackberry thicket?" she asked and pulled thoughtfully in the lengthy thread hanging from the cardigan. They stood under the great hall lamp and inspected the thread. It was emerald green and sparkled with something metallic. "It was a very expensive cardigan", the woman said seriously. "I sincerely apologize", said the man and hung it on a solid cloth hanger of cherrywood. "I've thought about trimming the thicket many times, but you know how it is, time passes ... I might be allowed to treat you with dinner as a recompense?" She was preparing an answer, he wasn't prepared to hear. "Afterwards", he said quickly and smiled tactfully. "First the suit de Coco Chanel." 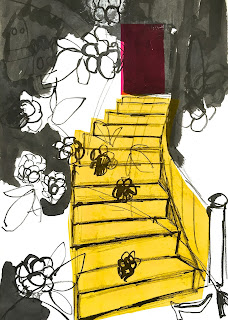 6. He walked with great energy across the hall, led her up the stair tower which was decorated with African clay masks. They came up to the first floor and he guided her to the bedroom. He flicked on the light and cut across the room on a sound absorbing carpet. "Here you go", he said and opened the door to a walk-in closet. "Wow, what an amazing wardrobe! Such I have always dreamed of", she exclaimed with obvious enthusiasm. 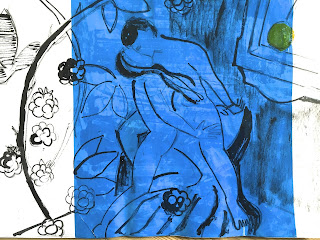 7. She pulled on the suit which fit her perfectly like an extra skin. "Good God, how good it looks on me," she whispered and turned around in front of the mirror. The man who had hitherto acted with restraint, suddenly began to cry uncontrollably when he saw her. He fell on his knees and embraced her. He sobbed and caressed her body under the fabric, which sounded like sandpaper under his aging hands. Same size, same everything. She pried off his hands when they reached her chest, and held them for a while as to alleviate the otherwise stern rejection. "Please stay", he whispered. "Yes, I'll stay," she said flatly. 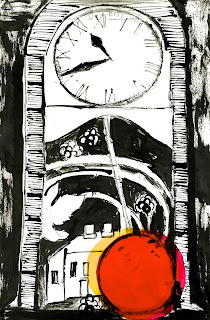 8. "Stop looking at me that way", she said. "Tell me about your wife instead ... where do you think she is now?" His expectant gaze turned into surprised unbelief "'Where she is  now? What do you mean? She's dead." A piece of steak flew out of his mouth when he spat out the initial d in dead. She followed the steak piece as it landed next to her hand. "Sorry", he said. "No problem", she said. "She's just dead. Time just stops", he concluded. 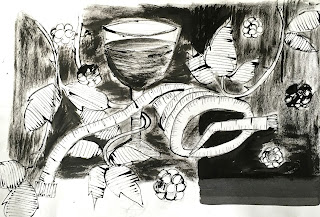 9. "Everyone will stand in judgment before the Lord", said she and took a sip of wine. "Stop talking nonsense, I can't stand listening to it", he said, while chewing hard on a piece of meat. For some reason, the woman triggered feelings within him, which he hadn't been in touch with for a long time. Maybe never. He spiked a roasted beetroot on his fork and devoured it violently. The beetroot got stuck in the wrong pipe. He struggled for air. Coughed and made a great noise. His wine glass got overturned. Red wine ran down into a puddle on the kitchen floor. The woman got up from her chair and slammed him hard in the back, took a firm grip over his torso and squeezed. "Ambulance," he hissed. Then it was black. 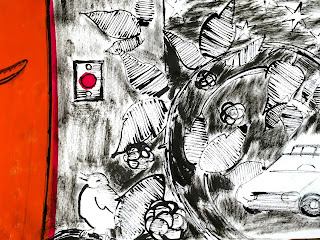 10. Blue light shone on the other side of the blackberry thicket. She watched mutely the experienced attempts of the ambulance medics to revive the man. His face was pale like a full moon. She hoped that he had arrived to something more than a dark nothing. "Was it your husband?" asked one of the ambulance medics "No," she said and shook her head slowly. "You can expect to hear from the police shortly. Just routine questioning." "It's okay", the woman said quietly. They carried him out on a stretcher. 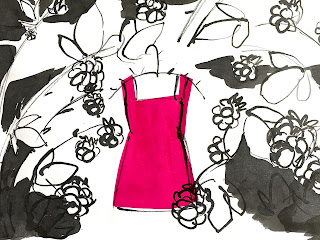 11. She took the cardigan from the clothes hanger, went out and inhaled the cool air. She went through the tunnel in the blackberry thicket. It was wider now. The ambulance medics had cleared it up, in order to make room for the stretcher. "Finally the job got done", she mumbled. She stopped and picked a blackberry on the other side. It was not as sweet as the one she had tasted before. Not as big, black and juicy. She strolled home in the pink Chanel suit.