Maria De Lima sums it up


Having heard of the residency from one of my friends I decided to contact Nina, whom I had studied with at Camberwell, but had since lost touch with. The principle of the residency (no application form, proposals, etc) was a big attraction as I’ve always found that the project-based emphasis of most residencies, as well as their focus on responding to the local community and or area, is largely incompatible with my practice.

My plans before departure consisted simply of using the 2 weeks I was to spend in Trélex as an occasion to concentrate on my video work, away from the paintings in my London studio. On arrival I was blown away by the residency space set up in Nina’s attic. There’s a great mix of natural and strip lighting, plus a large movable wall that makes the space incredibly flexible. For me it immediately became a large filming set that I would never have access to, let alone be able to afford, in London.

Ideas that had been floating in my head around gesture, selection, nostalgia… developed quite naturally in response to the possibilities of the studio as a filming set. The movable wall quickly became a green screen, and the studio with all its shelves, chairs, and odd bits of furniture became the perfect back drop. (http://mariadelima.wordpress.com). 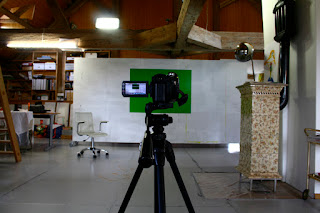 I also managed to fit in a good bit of tourism whilst at the residency, my first port of call being Nyon, the closest town to Trélex. It’s a mix of medieval Swiss architecture and modern shopping centres, and as you move along the road that follows the lake you will come across little ‘beaches’. I managed to cycle to one and have a refreshing dip, but it is a quite a way!

If you head to Geneva I’d recommend going straight down to the Rue des Bains from the train station. The surrounding neighbourhood is the bohemian quarter of the city and the Centre d’Art Contemporain, MAMCO and Centre de la Photographie are all handily housed in one building. Despite the MAMCO show being in the process of being taken down I was allowed in to have a wander through the remnants of the exhibition; a pretty novel experience. Make sure you check show dates on the web before you head down as none of these galleries have a permanent collection (this is one of the best sites I found for contemporary art listings: http://www.geneve-art-contemporain.ch). There are also other smaller commercial galleries that you will bump into if you wander around the area. 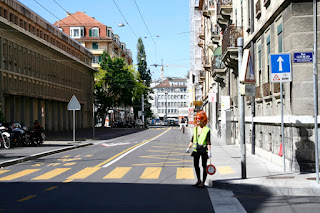 Towards the end of my stay I headed down to Lausanne to visit to the Art Brut Museum and learnt a very important lesson: the Swiss take public holidays extremely seriously. And they have some pretty random public holidays. So make sure you triple check before you head out to visit any museum, as the train fares are not cheap here.

Nina has been incredibly supportive during the time I’ve spent here and given me full licence to use the studio in whichever way I wanted. We quickly found there was a lot of common ground between our practices that led on to some really engaging discussions. It’s also been great talking about the more practical aspects of being an artist and exchanging different experiences. Having come to the end of my 2 weeks I can say it’s been absolutely brilliant! 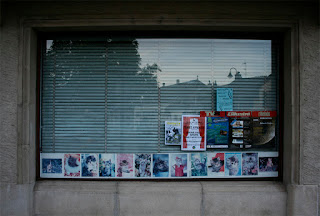 One of my favourite sites in Trélex
No comments: